How to get from John Kennedy Airport to New York?

This article is about the route John Kennedy Airport-New York

Yana Safina
author of the article

The station for trains and metro trains from JFK Airport is not located at the airport itself - you will have to get there by special AirTrain train. By using this train, you can also get from one terminal to another (for free). The JFK metro line from the last AirTrain station to Manhattan operates 24/7. The bus and train are also available 24/7. The JFK shuttle last journey is at 11:30 p.m. And don't forget that you can always book private airport transfers.

There are so many exciting places to see in New York that tourists often get lost there. After arriving in the city, take a stroll along Fifth Avenue and Park Avenue. After that, enjoy the unusual shape of the Flatiron Building which is located at the intersection of Fifth Avenue, Broadway and 23rd Street. Also, take a look at magnificent artifacts in the Metropolitan Museum of Art and the American Museum of Natural History. And, of course, you should also visit the New York Public Library which was the setting for "The Day After Tomorrow" movie. Among the most popular tourist attractions are also Central Park and Times Square where you can spend even the whole day. And, finally, don't forget about the Empire State Building offering a breathtaking view of the city!

Each terminal of the airport has the exit to the AirTrain monorail. Take the train running to Jamaica Station. The duration of such a trip is 20 minutes, and its cost is $5. The fare is paid when exiting the train.
At Jamaica Station, change to the JFK Airport metro train (line E) which will take you to Manhattan. The travel time is 1 hour 15 minutes, the ticket price is $2.75. Tickets can be bought from special JFK metro ticket machines.

those who want to save money, travellers without children and large luggage, young tourists, those who can orient themselves in unfamiliar areas, tourists arriving at night.

How to find the metro station at John Kennedy Airport:

The AirTrain monorail can be found in each terminal of the airport. To find it, follow signs from the buggage claim area. The exit to the metro station can also be easily found due to special signs.

The JFK Airport shuttle NYC Airport Express goes from the airport to Manhattan in three directions: Penn Station (in the center or New York), Grand Central and Port Autority Bus Terminal. The price of a ticket to any of these stations is $16, the duration of the trip is about 1.5 hours. Shuttle tickets can be bought from the driver when boarding.

travellers with children, young tourists, those who have large luggage.

How to find the shuttle stop at terminals:

The shuttle stop can be found on the right side of each terminal.

From Jamaica Station (where you can get by AirTrain train), take Long Island Rail Road trains from JFK Airport. These trains arrive at Penn Station. The trip takes 20 minutes and costs $10. Train tickets can be bought at the train station ticket office.

families without children, travellers without large luggage, young tourists, those who arrive at night.

How to find the train platform at John Kennedy Airport:

The Long Island Rail Road train departs from Jamaica Station which is connected with all airport terminals by AirTrain monorail. To find the necessary train, follow special signs and pay attention to the information display.

There is the bus station in Terminal 5 from where buses Q10, Q3 and B1 depart. The bus fare to any destination is $2.75, the duration of the trip by JFK Airport bus is from 1 hour 40 minutes. Also, you can get to Jamaica Station by AirTrain, and then change there to the JFK bus Q6, Q8, Q9, Q20, Q24, or Q25, which will take you to different districts of New York.

How to find the bus stop at John Kennedy Airport:

The bus stop is located at the exit from Terminal 5.

If you are in New York for the first time and are afraid of getting lost, or you are travelling with your family or have lots of luggage, then you will not probably want to travel by public transport. The best travel option for you will be a private transfer or a taxi from JFK: the driver will not only meet you at the airport and lead you to the car, but also help you with your luggage. The duration of such a journey is 1 hour 20 minutes, the journey cost is $163 for an Economy-class car and $188 for a minibus up to 7 passengers. Airport transfers from JFK Airport should be booked in advance - via phone or online.

to your hotel in New York or private address

There are lots of taxi companies at John Kennedy Airport, so you will quickly find a car in case you don't have any special requirements (child seats, minibus, etc.)
Pre-booked transfer: the driver will be waiting for you at the exit from the arrivals area with a nameplate.

How to find the taxi rank at John Kennedy Airport:

Taxi ranks can be found at the exit from each terminal.

To rent a car without a driver to get from Kennedy Airport to New York, you’ll need an IDL and a passport. International companies require an embossed credit card. If you booked a car online, don’t forget to provide a voucher. Insurance and unlimited mileage are included in the price of car rental per day. A deposit of $300 is usually charged. Fares, parking, and other expenses are paid by the customer. You can rent a car at New York Airport.

only within the USA

high
don’t depend on anyone, plan a route yourself.

How to rent a car

Reserve a car online or hire it at New York Airport.

How to get from John Kennedy Airport to New York? 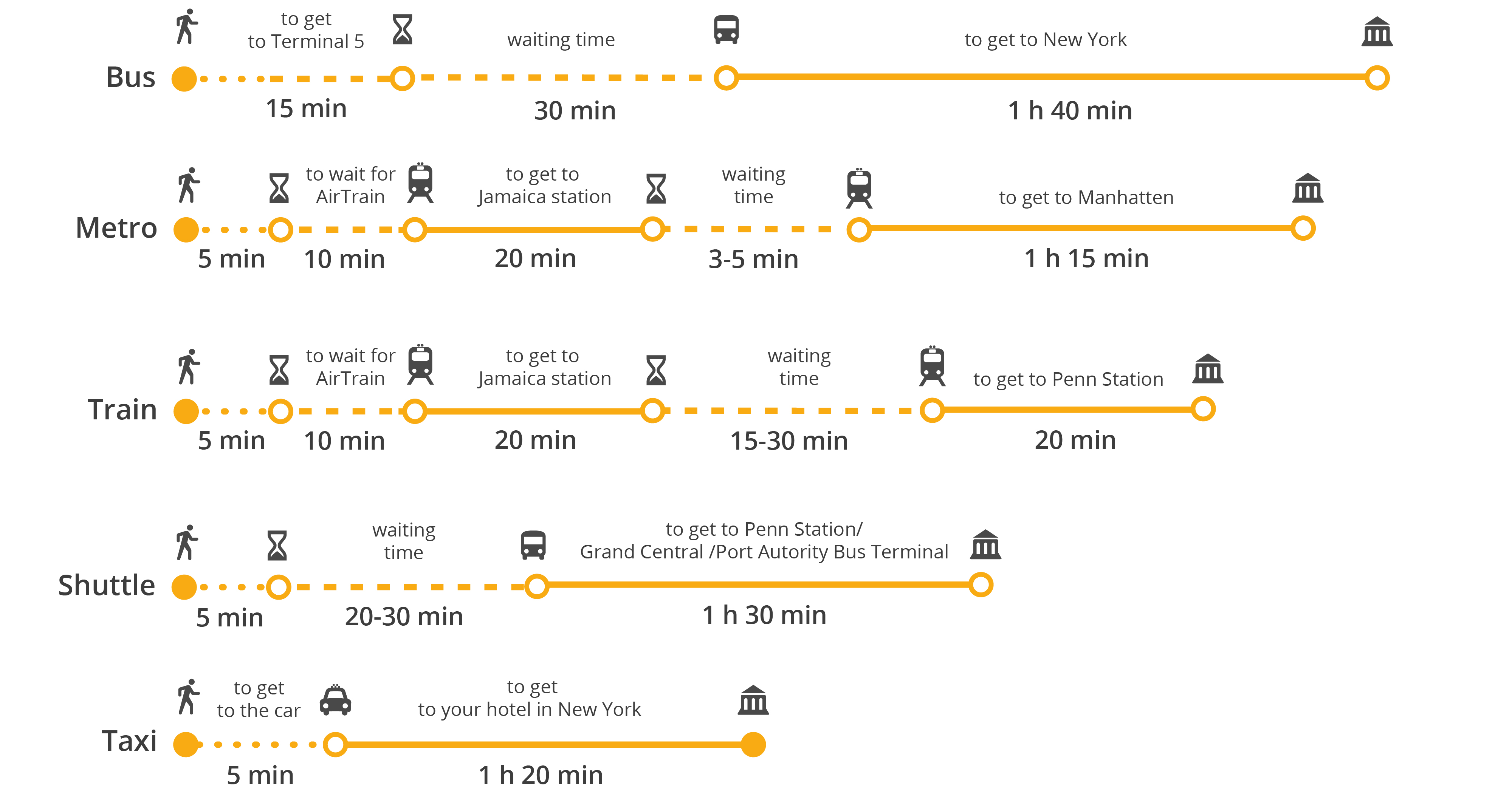 There are really lots of options to cover the route John Kennedy Airport-New York. If you are travelling solo, without lots of luggage, and are not afraid of getting lost in the city, then choose public transport. In other cases, it is better to book a private transfer.

How to get from Miami Airport to city center?